After visiting Stephan Brenneisen in Basel Switzerland, I traveled to Stuttgart, Germany where I met with International Green Roof Association (IGRA) Director Wolfgang Ansel. Wolfgang lives with his family on an old farm property in a Stuttgart suburb; he's lived there his entire life and his ancestors settled the land some 400 years ago! Wolfgang welcomed me into his home and quite graciously spent a day taking me to a number of green roofs. It was a great opportunity to learn about the policies and programs that promote green roofs in Germany. 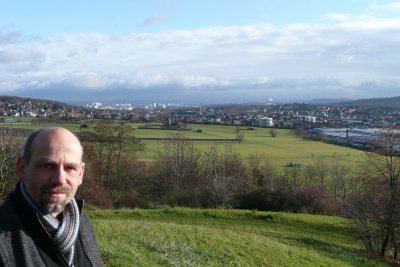 The emergence of modern green roof design and installation in Germany has its origins in the growth of the environmental movement in the 1970s. Today some estimate that about 10% of all German roofs now have green roofs. Stuttgart has been a clear leader in implementing policies encouraging and requiring green roofs since 1986. As Wolfgang explained, the legal framework for this progress was established in the Federal Nature Protection Law and Federal Building Codes. Both create the mandate for environmental improvement and mitigation for which green roofs are one solution. However, a mix of regulatory policies and incentive programs at the municipal level that has been instrumental in fostering the green roof building boom in Stuttgart and elsewhere in Germany.

Wolfgang summarized this mix of policies as follows:

1. Direct financial subsidies by government in the form of start-up grants can amount to 10-20 euros per square meter of green roof. The grants motivate some owners of private or commercial properties to voluntarily install green roofs. These grants must be value-added and not fund green-roofs for which are required as a condition of development. In recent years funding for green roofs have also come from federal funding to reduce CO2 emissions and reduce energy consumption, two of the benefits of green roofs. In Stuttgart, city staff provide free consultation for green roof development and interest and demand is high; in May of 2009 there were funding applications pending for 4,000 m² of green roof.

2. Reduced stromwater fees are provided to those who install a green roof. Depending on the prevailing fee, this can amount to savings of 1 euro per square foot of green roof. Over an average 40-year lifespan of a green roof, this in many cases this is enough to pay original installation costs.

3. The Federal Nature Protection Law includes provisions for ecological compensation that require that new greenfield development replace greenspace and associated environmental values lost to development. Ecoroofs are often a cheaper option than greenspace protection in the hinterlands and provides multiple social, ecological, and financial benefits in greater proximity to the original environmental impacts. Yet some local governments have set up banking or eco account systems similar to wetland mitigation banking wherein ecological compensation credits for green roofs can be pooled and leveraged for greater public benefit.

4. Local regulations in many larger German cities like Stuttgart require the installation of green roofs as a condition of development where technically feasible. In most cases that means roof with a gabled roof angle of less than 20 degrees. These requirements apply to a lesser and greater degree to current building construction and to larger urban planning zones. Stuttgart has provisions for new urban planning areas that call for over 1.5 million square meters of green roof.

Wolfgang showed me an example a new urban planning area at our first stop, a residential subdivision were many if not most rooftops were green. Unfortunately the vast majority of these roofs were out of view from the street. So the photos below show carports and outbuildings where the green roofs were visible. However as we toured around the subdivision, one could see tufts of grass and other vegetation emerging from just over the roofline of all the larger buildings with gently sloped roofs. 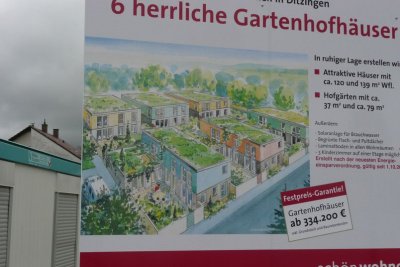 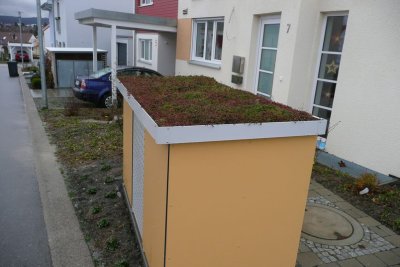 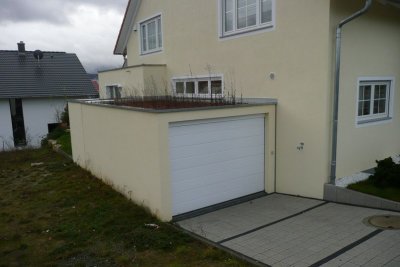 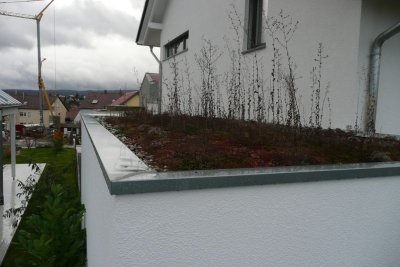 Wolfgang emphasized that a mix of tools- regulatory and non-regulatory- has been key to Stuttgart's success. The number and size of green roofs in Stuttgart grew quite slowly until the 1990s when planning mandates and regulations were added to enhanced incentive programs.

The impact of this policy change was illustrated in our second stop at a solitary hill outside of Stuttgart rising some 400 feet above the valley floor. The hill was partially forested and topped with a single tri-blade wind turbine typical of those found throughout Northern Europe. Apparently the hill was a former landfill some time ago but had since become a popular local natural area (I could not help to be reminded of Portland’s own St. Johns Landfill that now provides important open meadow habitat for Streaked Horned Larks and Meadowlarks). The decision to build the wind turbine on this former-landfill had been quite controversial because some people felt it- the wind turbine- would despoil the natural landscape. It was oddly comforting to know that Europeans are also capable of mistaking an artifact of human history for the product of nature.

But Wolfgang took me to the top of the hill to illustrate a different point relating to the more intentional cultivation of nature by humans. From the top of the hill we looked south across a large commercial- industrial area flanked by farmland, arterial streets, and rail lines. With the sun shining in our faces, the mix of warehouses and office buildings initially looked like any other you might see in the United States excepting for the speedy commuter rail that served the area. But looking closer, I could see that all the buildings to west of a certain point and a good portion of the newer ones to the east were topped with red and green-tinged roofs. At closer inspection I could see- to my astonishment- that these were green roofs. 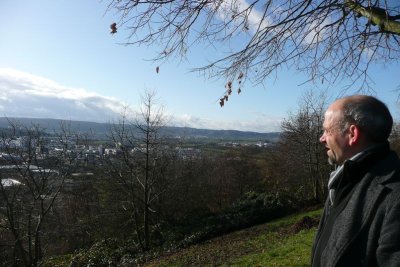 A view from the hilltop outside of Stuttgart.

Wolfgang pointed out that the older buildings to the east that lacked green roofs were built before the adoption of Stuttgart’s requirement that all new buildings with roof angles less than 20 degrees install green roofs. Most the others had been built with green roofs since. 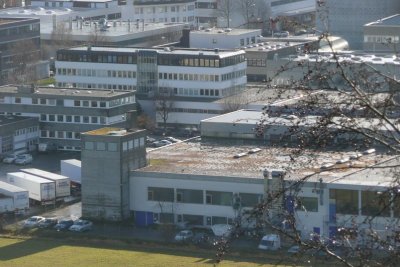 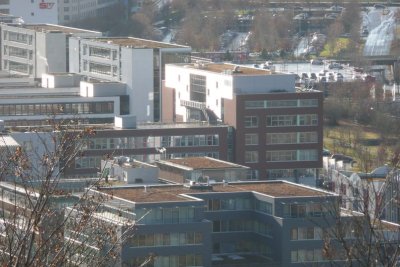 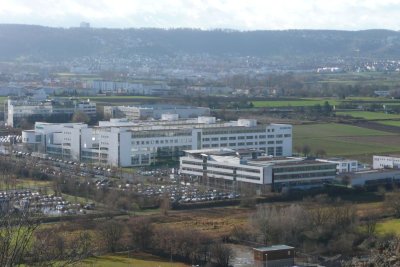 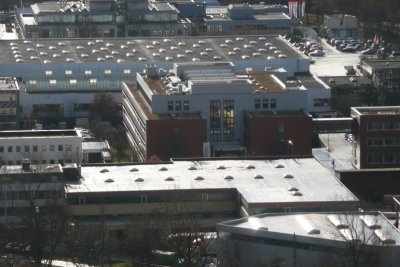 The view from the hill in Stuttgart is an amazing demonstration of the local governments success in implementing green roofs. Germany clearly has exceeded spectacularly in increasing the volume of green roofs in their urban landscapes.

To his credit, Wolfgang did not just show me all the success stories. He also shared a site, at our next stop, where project design and installation fell far short of its original aspirations. The public parking garage we visited (the name and location I won’t reveal) had originally been plan to compensate for development of some local farmland with commitments to build an expansive, intensive green roof that could also serve as a public greenspace. However the project faced huge cost over-runs and eventually gave way to a more immediately lucrative plan to build photovoltaics that displaced much of the roof vegetation. Unfortunately the lack of clearly defined goals and cost over-runs, led to a poor design and the needless trade-off between solar power and a fully functional green roof. The project stands as an monument of how not to plan and build a green roof, so in that sense is not entirely useless. Also while touring the site, we spotted a couple of peregrine falcons 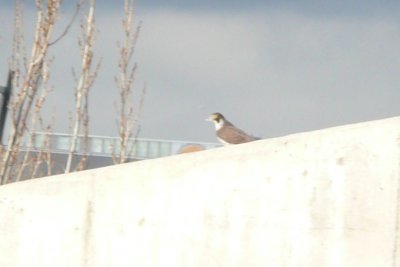 By all indications, Germany has demonstrated clear success in building an astounding quantity of green roofs, to date and making green roof design and installation a mainstream building practice. However, it seemed less clear that Germany has made the same progress of Basel or London in promoting biodiverse green roofs. Wolfgang admitted that the lack of clear design criteria and uncertainties about installation and maintenance costs held back the widespread development of biodiverse green roofs in Germany. Also, despite the benefits of making green roofs a professional and mainstream building practice, I did not get the impression that Stuttgart was encouraging ordinary citizens to install green roofs on their homes, carports, and out buildings, at least as energetically as I witnessed in London.

That said, our last stop at Naturschutzzentrum Schopflocher contradicted both these initial impressions.

Naturschutzzentrum Schopflocher is the Nature Center for the Swabian Alb Biosphere Reserve located outside of Stuttgart. There we met the director Dr. Wolfgang Wohnhas and toured two green roofs on site, including a marvelous 13 year-old roof atop of an equipment shed, built with volunteers as a demonstration. 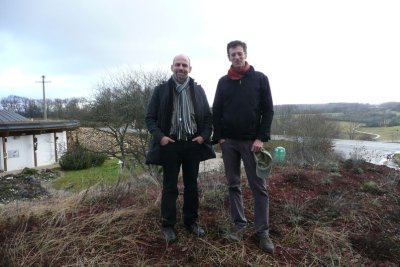 Wolfgang and me on the green roof at Naturschutzzentrum Schopflocher. 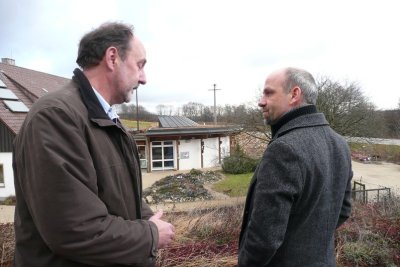 The equipment shed roof was really quite lovely even in mid-December, having a diversity of mosses, lichens, herbaceous plants, forbes, and wildflowers. The colorful photo below was taken in the spring. Both Wolfgangs insisted that the roof is really as stunningly colorful and diverse as portrayed here. How many homeowners in Portland would love to have one of these on their property? 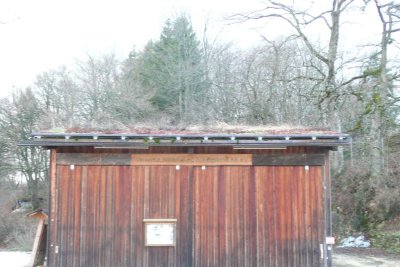 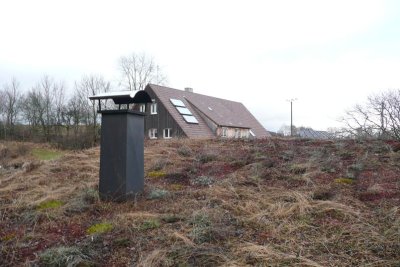 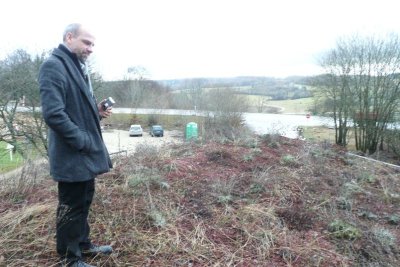 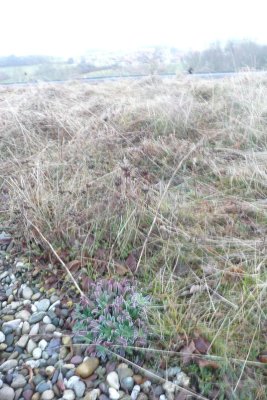 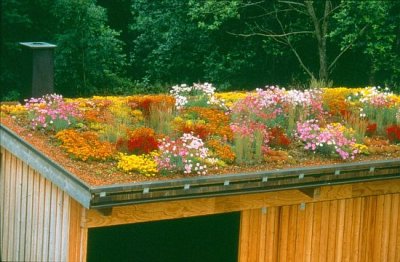 All in all, the visit with Wolfgang Ansel in Stuttgart left me impressed by what is achievable in terms of green roof development with the right set of public policies. Portland and other cities in the United States have a lot to learn from the German experience in promoting the development of green roofs.

Posted by jim.labbe 08:09 Archived in Germany

Previous Next Table of contents

Comments on this blog entry are now closed to non-Travellerspoint members. You can still leave a comment if you are a member of Travellerspoint.

If you aren't a member of Travellerspoint yet, you can join for free.